The Aegean Region is one of the most unique places to go for a holiday, with its magnificent nature, wonderful bays and shores where we can see the most beautiful shades of blue… Although these are the first features of the Aegean that come to mind, its cuisine should be given its due. The flavours of Aegean cuisine with olive oil, thousands of herbs, mezzes and of course seafood… There are many different flavours unique to this heaven-like place. Here are some of the flavours unique to the cuisine of the Aegean, the land of herbs.

Stuffed squash blossoms, which is one of the wonderful flavours of the Aegean cuisine, is a dish specific to the summer season in general. It’s made from squash blossoms grown in the Mediterranean and Aegean. The blossoms are carefully picked in the early morning hours of July. Picking and making is a delicate process. These delicate and delicious blossoms are picked in the morning to avoid being affected by the midday heat. If you’re late, the squash blossoms will have a very bitter taste. It is also necessary to be careful when separating the stem and thorny part during washing. While the inner side is filled, very little is put in so that the blossoms do not tear. Stuffed squash blossoms, one of the most delicious olive oil dishes of the region, is served with lemon. In the Aegean region, cowpea comes in more than one variety. One of the most delicious flavours of this region, cowpeas are not missing from the homes of the people of the region. It can be eaten in salads, by adding plenty of olive oil and lemon, as well as in soups and meals. There are varieties such as sea cowpea, black-eyed peas and fresh cowpea. Sea cowpea is served as a mezze alongside the Aegean seafood. Shrimp is one of those that goes best with sea cowpea.

Fava with olive oil, one of the Aegean flavours influenced by Greek cuisine, is widely consumed as a mezze. It’s also used as a stuffing in various dishes. It’s possible to find the taste of fava made with dried broad beans and plenty of olive oil in pastries, canapés and salads. It’s a flavour that is common in many Aegean cities such as Ayvalik, Kusadasi, Izmir and Cunda, especially in fish restaurants. It is among the significant flavours that can be found almost everywhere in the Aegean Region. We are already very familiar with this flavour. It’s a dish that is often made at homes together with the tomato and pepper sauce to juice up the meatballs. You may have eaten a lot of the homemade version. And since you’re in Izmir, we recommend you to taste it on the spot. Turkish Pie with Herbs, which is made in various places of the country, has another taste when it’s made with the Aegean style. As you know, when it comes to Aegean cuisine, herbs are the first thing that comes to mind. This crispy pie offers an insatiable taste with fresh herbs. It can be diversified with many herbs such as fresh coriander, spinach, kelp, stinging nettle, mallow, chives, chicory, water-plantain, rockling, goosefoot and radish. The stuffing is made raw or roasted according to preference. In order to keep its crispy consistency, the phyllo dough is wetted with yogurt and egg white on each layer. Turkish pie with herbs is a flavour that can be tasted in different corners of the Aegean, such as Milas, Alacati, Bademli, Sirince and Sigacik, especially in Mugla.

Boyoz, among the Izmir’s breakfast classics, is one of the answers to be given to the question “What to eat in Izmir?”. Boyoz, which is very popular nowadays, is made by preserving its original taste. Tahini, which has a high nutritional value, gives the dough its oval form in layers. It’s a flavour you can find in almost every corner of Izmir. In particular, there are many beautiful places in Alsancak, which are famous for their boyoz. There are also varieties prepared with filling ingredients such as cheese, olives and spinach. A wonderful trio is created with tea and boiled eggs for breakfast. You should have a boyoz breakfast at least once during your trip to Izmir. 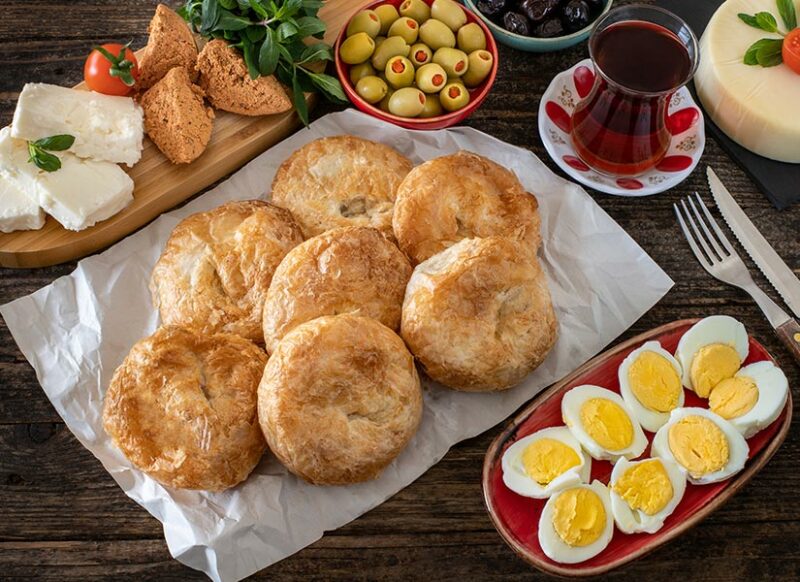 You should also try the Turkish Kashkek, which can be found in most parts of Anatolia, in the Aegean style. Made by the local people of the region especially on occasions such as weddings and holidays, kashkek is formed by the combination of flavours such as bone, meat, cracked wheat and olive oil. It’s a delicious dish you can taste in many of the restaurants in the Aegean Region where local delicacies are served. Izmir bomb, in short, is one of the most delicious flavours of tea hours. It is also a street flavour that you can find in many places in Izmir and its surroundings. A delicious taste that emerges when thin cookie dough is filled with fluid cream and hot chocolate. Although its fluid consistency and hot serving make it a little difficult to eat, its taste really meets the expectation. Izmir bomb is the favourite flavour of those who love chocolate intensely. We should also remind you that here are varieties with raspberry.

Izmir hotels, where you can stay to enjoy delicious breakfasts with Aegean flavours, special meals and desserts that will boost your energy, await you at Odamax!