Trabzon is one of the most beautiful cities in the Black Sea with its thousands of years of history and its fascinating nature. Having an important place with its plateau tourism, the city features many beauties that should be discovered in the central regions. With its historical buildings such as monasteries, museums and mosques, Trabzon is also a very important destination for cultural tourism.

Located in the Altindere Valley of Macka district, Sumela Monastery is a fascinating beauty situated on the hard and steep cliffs. The monastery, also known as the Virgin Mary’s Monastery, is located 1300 m above the sea and 300 m above the valley. On the outskirts of Montenegro, it’s quite impressive with its surreal appearance. It has a breath-taking view against the lush forests in front of it. The monastery, which was founded in the 4th century AD, has undergone changes in different periods and has been renovated with new additions. The formation of today’s appearance dates back to 1204. The main sections of the Sumela Monastery are a bedrock church, several chapels, guesthouses, student rooms, a library, a kitchen and a holy spring. Sumela is one of the best examples of the tradition of establishing monasteries in caves, waterside and forested lands.

Uzungol, one of the most touristic spots of Trabzon, is 19 km away from Caykara. In the region where the first settlement was made by the Greeks in 1586, the first permanent settlement started after 1650. Located at the intersection point of the rainforests, Uzungol stays green most of the year thanks to its abundant rainfall and partially temperate climate. The region, which is home to 250 bird species as well as over 60 endemic plant species, is a Natural Protected Area.

To enjoy the Uzungol view, you should have a nice breakfast in places that overlook the region. There is also a viewing terrace to watch the view. You can take lovely walks in touch with nature and also you can visit the ponds. At the same time, detailed information about the history of Uzungol can be obtained by visiting the Dursun Ali Museum located in the region. 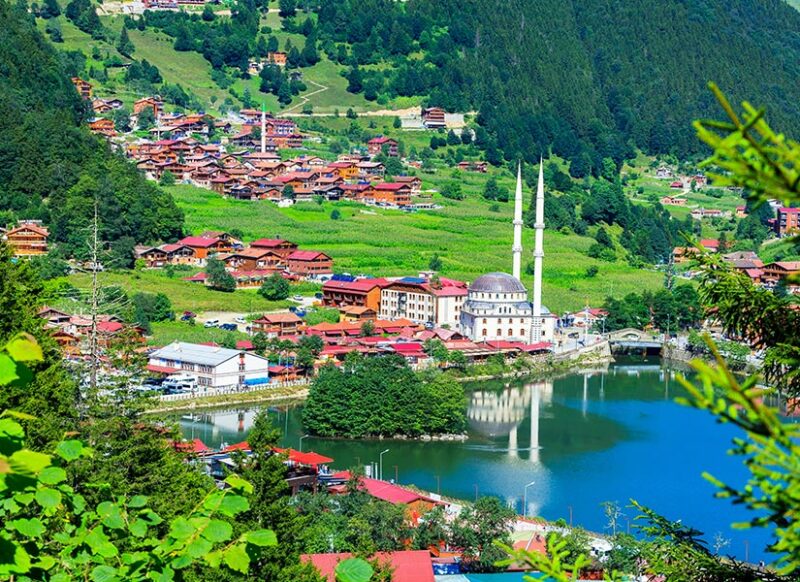 The area covering Sumela Monastery and Altindere Valley is considered national park. The majority of its surface area consists of forests and in-forest areas. Some of them are used as pasture by the local people. The park is also rich in plant and animal diversity. 135 plants, 184 birds, 9 amphibians and 10 fish species live here. The 65-kilometer-long forest road for trekking is quite peaceful. It’s a place where you can refresh yourself with its magnificent nature and fresh air. Rivers, streams and waterfalls in the pine forests are among the beauties that spice up the walking trail.

Activities such as camping, sport fishing, trekking and nature expeditions can also be done in the National Park. 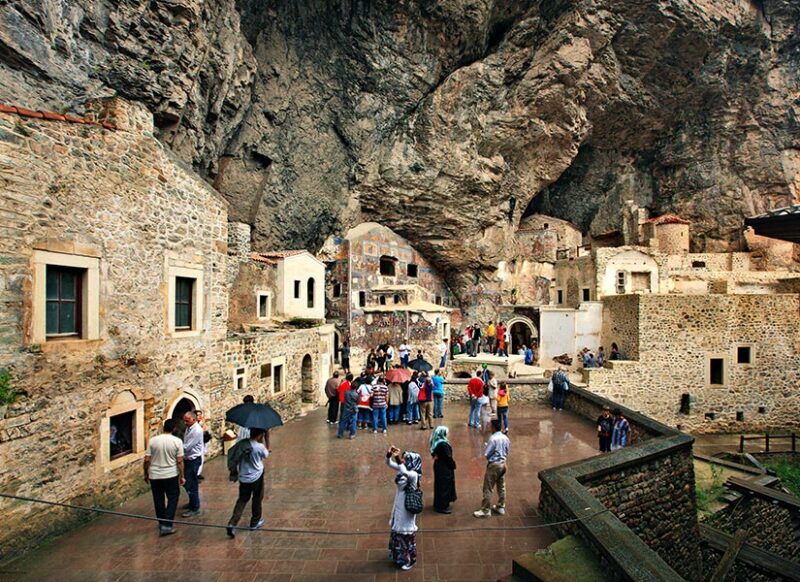 One of the best climbing points in Turkey, Sahinkaya is located in Caykara district. Surrounded by dark spruce forests, this natural formation looks like a castle when viewed from afar. The activity options are not limited to this in Sahinkaya, which is one of the favourite spots of climbing enthusiasts. You should definitely try different options such as nature walks, camping, trekking, photo safari where you will be accompanied by spectacular views.

Hamsikoy, which was established at the skirts of Zigana Mountains in Macka, has an altitude of 1300 meters. What makes this place interesting is that it is famous for its rice pudding. The ‘Hamsekoy’ region, which consists of the villages of Hamsikoy, Ciralı, Dikkaya, Ciharli and Guzelyayla, are so cute and each one is very clean and has plenty of oxygen. Charming houses amidst the various shades of green see the wonderful forest view. Those who come to taste Hamsikoy’s famous rice pudding can keep in mind that this place is also very suitable for trekking and mountain biking. 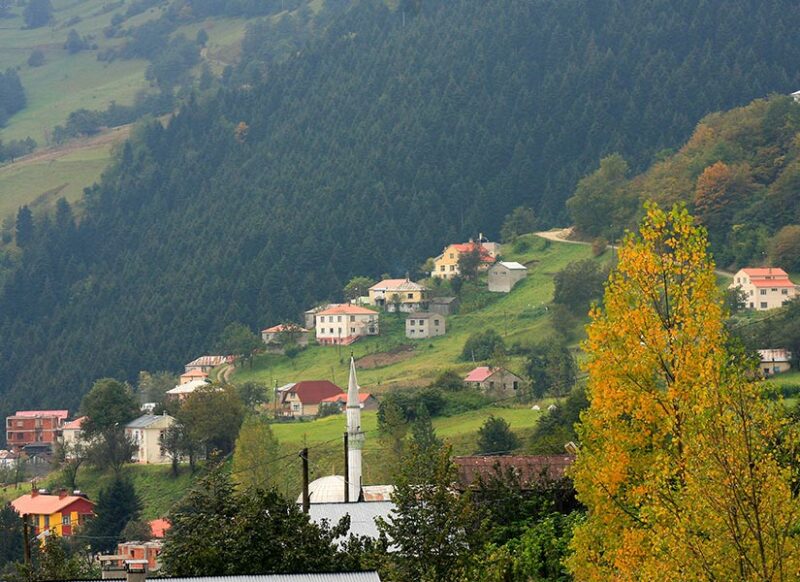 The mansion, which was built as a summer house in 1890, is a structure bearing the traces of European and Western Renaissance architecture. It was allocated for the accommodation of Mustafa Kemal Ataturk during his visits to Trabzon between 1934-1937. This is known as the place where Atatürk wrote his will. The mansion, which was turned into a museum in 1943, contains items, furniture, porcelain and carpets from the late 19th and 20th centuries. Paintings of Ataturk are also exhibited here. You can take a nice walk in the garden of the mansion, which is located in a lush pinewood. 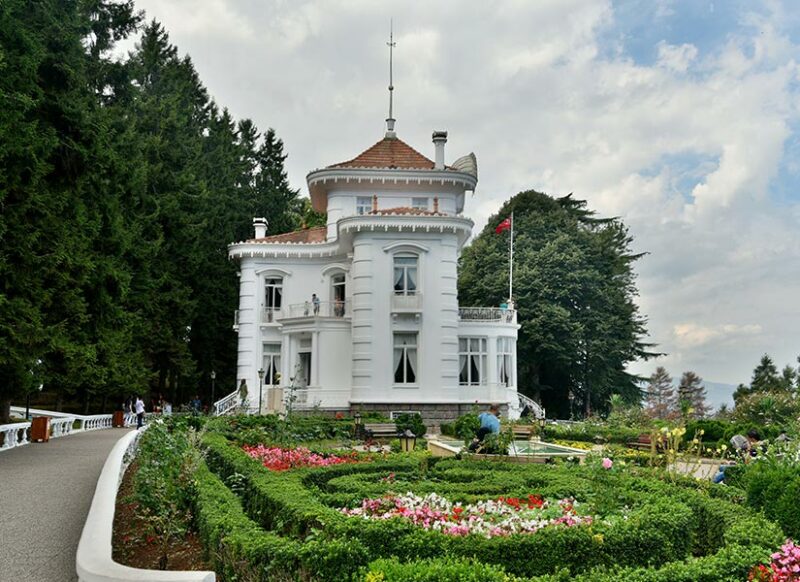 Trabzon Castle, which has an important place among the spots that should be visited in the centre of Trabzon, is located on a high rock between Zagnos and Tabakhane Valley. The oldest walls of the castle today are from the 4th century BC Roman Period. The structure, which consists of Upper Fortress, Lower Fortress, Middle Fortress and Inner Castle sections, is trapezoidal in shape, unlike the castle structures we are used to. It’s said that the city got its name from these shapes.

There are also different historical places you can visit around the castle and in the city centre. Ortahisar Fatih Mosque, Trabzon History Museum, Trabzon City Museum, Hagia Sophia Museum are some of them…

You can book your room in Trabzon hotels and spend more time on the places you want to visit. 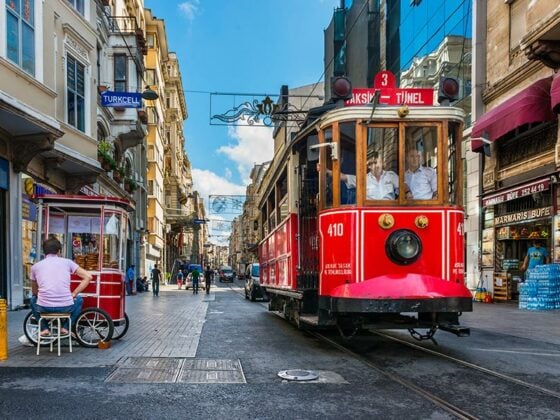