The uniquely beautiful city of the Southeastern Anatolia Region, Mardin, which has hosted different cultures together in a peaceful environment in its deep-rooted past and still continues to do so, is a rich place with many spots worth to see. Consisting of two parts as Old Mardin and New Mardin, the city is a geography that promises enough diversity to lay the wonderful sceneries of New Mardin under their feet along with the hill that welcomes those who want to visit Old Mardin first. We have compiled the frequent destinations that will help you determine your route while visiting this special city, which is one of the most important places of cultural tourism.

Located in the city centre, Mardin Castle is one of the most important sightseeing places. Also known as the Eagle’s Nest, the castle stands out with its natural beauty consisting of cliffs. It is a place that has witnessed different civilizations that have been guests of Mesopotamia such as Babylon, Persia, Assyria, Rome, Sumer and the Ottomans. Inside the castle, there are structures likes Turkish baths, cisterns, mosques and palaces as well as the hidden sections. The castle warehouse and the ruins, which are known to have been used for residential purposes, offer the chance to witness that this castle was one of the safest shelters of the period. Since it’s located on a high point, it gives the opportunity to see Mardin as a whole. For this very reason, it’s impossible not to be amazed by the splendour of the view, which sees the Mardin Plain from a height of about a thousand meters, almost from a bird’s eye view. On the other hand, the streets of Mardin, brightened by the sparkling city walls in the evenings, look spectacular as well.

Located very close to Mardin Castle, Zinciriye Madrasa is at a point that can be reached by walking after the castle tour. This magnificent architecture, which was Built by the Artuqid Sultan Melik Necmettin Isa in 1385, this magnificent architecture amazes its visitors with its outstanding portal. Also known as the Sultan Isa Madrasa, the structure is more commonly referred to as the “Zinciriye Madrasa” by the public. The chains stretched over the two-segmented dome of the madrasa, located in the centre of Old Mardin, gave the building this name. The chains placed in the cavities created to prevent the walls from being damaged by rain water allow the water to flow directly to the ground. It’ll be an unforgettable experience to watch the Mesopotamian Plain from the top of the madrasa, which is built on a rectangular area and includes additional structures such as a mosque, courtyard and tomb, as well as its different architecture built on two floors.

One of the landmarks of the city, Mardin Grand Mosque is another piece built during the era of Artuqids. The mosque belonging to the year 1176 is among the architectural stone structures that best reflect the characteristics of the period and is one of the first places to visit in Mardin. It’s located very close to Zinciriye Madrasa and is at a point where those who visit the madrasa can also access it after a pleasant walk.

The stone engravings on the walls of the mosque are very impressive together with their fine craftsmanship. In some sources written in Assyrian, it says that this building was converted from a church to a mosque. The technique used in the carved dome from the outside also showed itself in different structures built later in Mardin and became a tradition for the architecture of this region. With their serene appearances thanks to their clear structure, the pools, located in the large and rectangular courtyard in the northern part of the mosque, bring a breath of fresh air to this place.

The Ancient City of Dara

Among the most important areas affected by the Assyrian culture, which manifests itself in many parts of the region, here comes the Ancient City of Dara. So much so that it is known that mostly Assyrian people lived in this city until the 14th century. It’s assumed that the city, which is located at a distance of about 10 km from the Syrian border, got its name from the Persian King Darius III. Although it dates back to ancient times, its remarkable ruins stand out. A multi-storey tomb found in the ancient city can be put as an example for that. The three-storey gallery tomb structure, which was formed by carving the bedrock, is the kind that those who see closely cannot remain indifferent. By looking at the ruins, it’s estimated that these tombs were built in 591 BC to be dedicated to the Eastern Roman people who lost their lives in the war with the Sasanians. The inner and outer walls surrounding the hill where the ancient city is located are in an undamaged structure that follows a distance of 4 km. While wandering around Agora Street which is paved with large stones between the portico and Dara River that consists of four bridges on it, you can admire how it still preserves its beauty. The ruins of the workshop show that this area was the city’s shopping centre.

Remained from the Aq Qoyunlu era, the madrasa is a strong and large structure that has been preserved until today. Featuring a single open courtyard, the madrasa has a total of 23 rooms on two floors. Classrooms have an extraordinary structure that receives the sun from sunrise to sunset, regardless of where they’re located. The figures, which can be found in other architectural works in the region, are also evident here. In the fountain in the courtyard, the place where the water comes out depicts birth, the place where it pours depicts the youth, the long grooves depict the maturity and finally, the still water collected in the pool depicts the death. The tomb next to it gives the idea that this place was designed as a social complex. Attracting the attention of the visitors with its gorgeous architecture decorated using detailed motifs, Kasimiye Madrasa is one of those places that you must see on a trip. 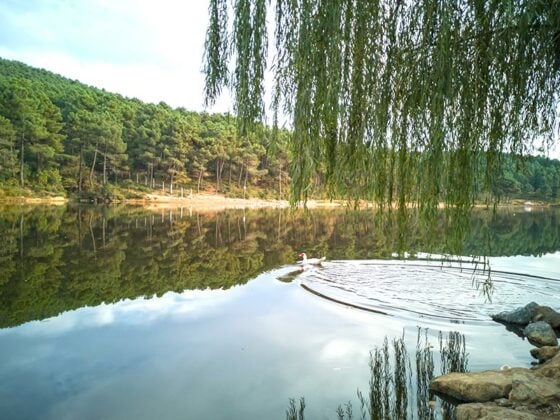